Being a triathlete comes with its own logistical challenges, and even more so if you’re a woman in triathlon.

1. Cheer Squad Prep: Make sure your cheer squad stands out so that you can see them. Tell them to set themselves up on a hill where you’ll be ascending, and consequently going slower. Take a big breath as you approach them, so that you can hopefully have a little chat.

Or, figure out a few designated areas that they should set themselves up at so that during the race you’ll know where to look out for them. This is especially handy when you need a pick me up and you can look forward to seeing them. Personally, I’m also a fan of a cheer squad t-shirt and signage – the punnier the better. 2.Tampons on course: Awesome, your period has arrived on or around race day. But don’t worry, if you’re anything like me, you feel unbelievably amazing in those first few days of menstruation right? Sarcasm indicator well and truly reading in the red zone right now. In saying this, while it may not appear to be an ideal situation, it is completely manageable. Keep in mind as well that apparently those hormonal changes can actually help with performance, personally though, I just feel like death. Hormones are a topic that are way above my pay grade, and so I’ll enlist an expert in a future feature piece to explain how the menstrual cycle works with exercise – this is not the right article for an in-depth discussion.

Back to managing your period on race day. Short course racing, hopefully, won’t be too much of an issue for you, but once you’re racing over the longer distances, a bit more planning is needed. I’ve carried tampons in my bento box [* pauses for slow clap *] and just pulled over at an aid station on the bike course when necessary. On the run, I have some in a zip lock bag and throw them in one of my pockets. Don’t forget the zip lock bag, because, we tend to throw water over ourselves on the run, and you know how those things love liquid. But, what if you forgot to BYOT, or your period surprises you mid-race? Well, at some long course races, they have tampons at aid stations! I found this out at an event a couple of years ago, and was pleasantly surprised. Full disclosure though, I haven’t surveyed every single event and asked them this question, so don’t solely rely on them being provided, but it is good to know.

Check out this video below:

4. Smile and give back: There’s nothing better as a spectator or a volunteer than to see athletes having fun. So share a smile and high five your crew and the volunteers. It’s a long day for them too, and more than likely for your crew, it’s been a big build up to race day as well.

As for the volunteers, I know of someone who used to buy a few coffee cards from local cafes, and shove them in their top. During the race she’d hand them over to her favourite volunteers. I love this idea! I have stolen it, and apologies, I can’t remember who originally told me about it.

Also, on the smile front, smile for the camera, that is unless you want to look super badass, then do that! 5. Ponytail: Don’t go too high with your ponytail under the swim cap, unless you’re prepared to spend time doing it again in transition before putting your helmet on. 6. Set a few alarms: Millennials, did you know that before smartphones, there were clock radio alarms, and also a thing called a wake-up call? If you’re staying at a hotel, generally speaking, both of these things still exist, so I recommend doing this for peace of mind. Just don’t offend the wake-up call person, or let Kramer use the hot tub the night before the race – Congratulations, you’ve just been Seinfeld referenced.

7. Sleep: Make sure you get a few good nights sleep before race day, because generally speaking the night before, you won’t get much sleep. And the night of a long distance triathlon, there’s a good chance the sugar high, the adrenaline and the pain will keep you awake that night.

8. Caffeine: Are you a coffee drinker race morning? Do your due diligence. What cafes are open at what time? Is there a coffee van at race site? These are all of the important questions. Start your day off right! If you’re not sure you’ll have time to purchase a coffee race morning, what’s your home brew option? We now travel with an aero press and bring our own coffee.

9. Toilet paper: BYO – always have it in your race bag. Always.

10. Carb night: These nights are great for camaraderie, and to get yourself pumped for race day. But remember your nutritional plan – if you’re not used to slamming pasta carbonara two nights before a big training day, maybe don’t treat the carbo night like an all you can eat pizza buffet.

11. Final finishers: Everyone finishing a long distance is a rock star in my opinion, but that last hour is a massive party. Muster up the strength and energy to get back down to the finish line and cheer them on if you can. As mentioned in point seven, it’s not like you’re going to sleep anyway.

12. Civilian clothes: Bring clothes and a towel for after your race. Depending on what distance triathlon you’re doing, you might want to catch up with mates for post-race brunch after a short course event, or dinner after a long distance race. Either way, if you don’t get the opportunity to go home and shower first, make sure you can at least change into civilian clothes. Oh, and bring a bag for dirty smelly wetsuit and race clothes.

(c) Paparazzi On The Run 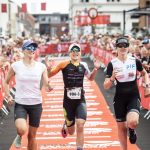