Big Bay Swim Conditions: What You Can Expect

What kind of conditions can you expect when you tackle the Big Bay swim on 10 November? Tri veteran and Big Bay regular, Frank Smuts, has seen it all…

As far as open water swimming is concerned, Big Bay is a swimmer’s dream, not only for the conditions, but also for its iconic status. It overlooks Robben Island and showcases Table Mountain in the most beautiful way.

For swimming, Big Bay can present totally opposing conditions on any given day. As a matter of fact, you might even have to use a different style of swimming  to the first offshore buoy, than when swimming back to the shore. The bay is unprotected from the effects the ocean and weather, and changes conditions as fast as the weather and swell changes. The two rock islands do no more than mark the left and right parameters of the bay, so there is no hiding from nature.

The currents, swell, waves, and especially the surface of the water will give you all the opportunities test your open water swimming abilities. The good part is that the conditions are rather predictable and easy to understand.

On a perfect day

A perfect day will be windless with a swell prediction of 1 meter or less. Then the sea will be like a mirror with very easy conditions. If you stand facing the sea, there is a slight current drifting from your left to your right, in other words, in a northerly direction, but it will have little or no effect on the day. On a good day Big Bay can be like a big pool and there are many days like that. Sighting won’t be a problem at all. Other than a maybe a low temperature, it will be a pool swimmer’s dream and very little adaptation in terms of stroke and style will be necessary.

The tipping point that turns conditions from manageable to tough is when the wind gets stronger than 15 knots (from any direction) and swell exceeds 2 meters. That is when we consider getting into a phone booth and putting on Superman wetsuits.

When the swell runs

On a perfect day, the course for the Challenge Cape Town swim will only be impacted by waves during the entry and exit of the swim leg. You will cross swell at a 90° angle going out and coming back, which makes for a nice undulating swim. Once you are through the surf line where the waves break, you will be swimming easy swell. Ever so often the sighting buoys might disappear, but just position yourself in the middle of all the swimmers ahead of you. The silent majority will lead you.

On the way back to shore, the natural direction of the swell will up your pace considerably. Expect a pace increase of up to 20 seconds per 100 meters on the way back, given fatigue and temperature did not get the better of you.

When the South Easter blows

The South Easter generates relatively low, but high-frequency chop with a hard feel to it. Going out to the first buoy, breathing right will favour you, because the wind and chop will be coming from your left. The high frequency chop has a way of demanding you to adapt your normal “pool stroke”.

You’ve got to increase your cadence significantly. If you stick to your “pool glide” you will lose speed in the same way that a bike struggles to freewheel on a corrugated road. Lucy Charles-Barclay actually has a nice video on YouTube covering the advantages of a high cadence for sea swimming.

Secondly, other than in the pool or a flat sea, you will have to lift your shoulder higher out of the water with every stroke to reach over the chop. If you tried to stroke trough the chop, expect a serious drop in pace, as well a drinking a lot of sea water. South Easter chop is relentless.

On the way back, chop will still be your enemy in the same way, but the run of the swell might up your pace just a bit. 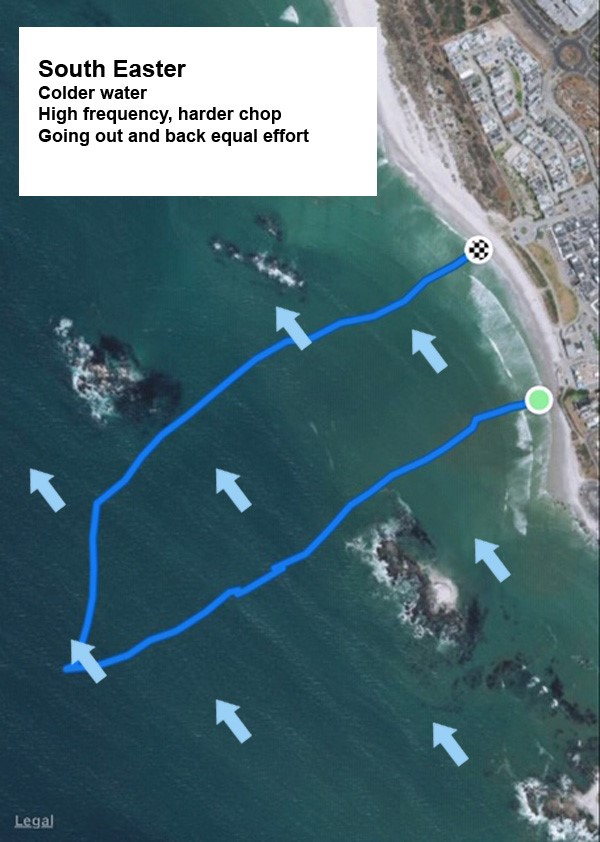 The South Wester blows straight onshore and going out will be a tough swim with a messy sea. Unpredictable chop, both in terms of size and frequency will test you all the way to the first buoy. A high cadence and over-the-chop stroke will be even more important. Swimming back will be much easier and fast, as the swell and wind direction will be with you. 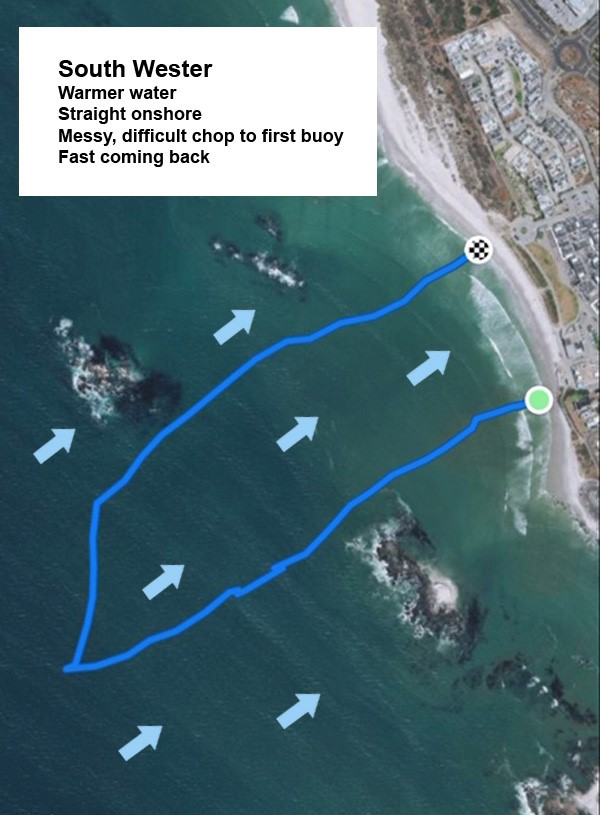 The North Wester is the Cape’s rain wind and blows the direct opposite direction of the South Easter; right to left if you stand facing the sea. However, the surface of the sea is totally different. Aided by the natural direction of the larger swell patterns, it generates bigger, unruly chop with a slight cross-onshore feel.

Going out you might have to dig a bit deeper, because of the onshore feel of the chop. Coming back will be better, but a higher cadence will still keep you steady since the North Wester has a way of fish-tailing you if you try to glide too much. 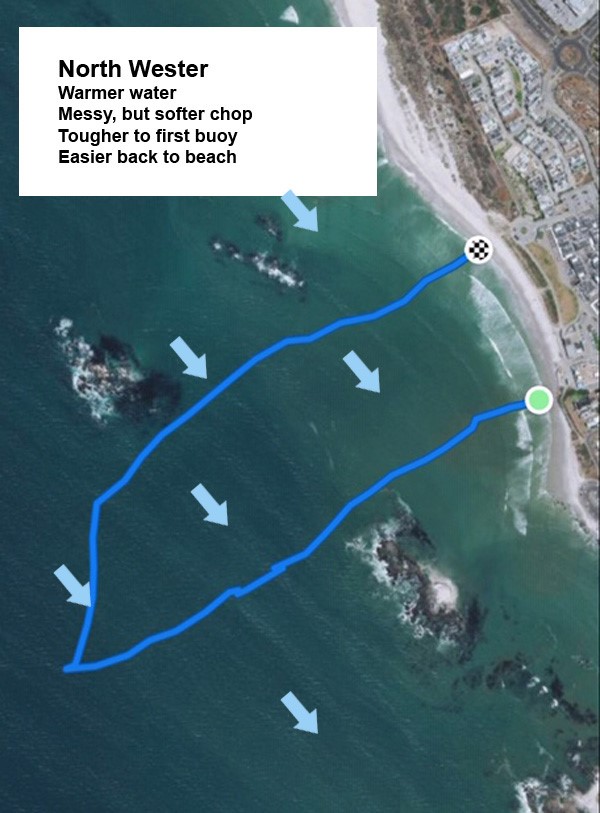 Big Bay waves are not as powerful as Durban waves. Unless the swell is really big and the tide very high, you won’t be facing back-breaking dumpers, but still treat the surf line with caution. Dive underneath a breaking wave as deep as the white foam is high, or at least two thirds of it. If you don’t, the wave might still suck you up and play ragdoll with you. Avoid being right behind someone that is about to go through big foamies. If they do it wrong, it will be like a WWE wrestler slamming into you. The same counts when you get back the shore. Breaking waves can propel swimmers into you from behind.

Going out, when you break through the surface at the back of the wave, get a good breath right away, check immediately if more breaking waves are coming and negotiate them accordingly. Don’t rush your stroke in any panicky way. Swim rhythmic while focusing on your best style and form.

Once you are in the surf line, look behind you when taking breaths. Breaking waves have the knack of creeping up and throwing you like you are weightless. If a breaking wave intimidates you with its size, don’t try to ride it with lacking body surfing skills. You might get tumbled badly. Put your hands over your goggles, drop below the surface and let it run over you.

In Big Bay, there are no hidden rock formations near the exit point, but swimming till your hands touch the sand is still advisable. For starters, wading waist-deep towards the shore is slower than swimming. Secondly, there might an unexpected, fist sized rock here and there on the sea bed. Athletes have hurt their feet, or even broke a toe, courtesy of rocks they could not see. When your hands touch, you normally have sufficient clarity to see what is under the water, but always tread lightly.

Big Bay can present a long, flat entry, especially during low tide. The depth of the water changes all the time in the shoreline during your entry or exit. One moment you’ll be walking faster than you can swim, but the next moment you’ll be slowed down as the water level raises due to incoming waves. That is when you launch into a dive and start swimming, till the water pulls back again, favouring a fast wade. You alternate between the swim-wade actions till one totally out-favours the other.

That is an overview of the most likely scenarios for the Challenge Cape town swim. 10 November will be a day for making great memories, so make the most of it by preparing as best you can.

If you live in the Cape, treat yourself to many swims in Big Bay, because it is fun. If you are from upcountry, check the weather and swell charts and plan a weekend well in advance of race. Any excuse to visit Cape Town is a good one.

See you on race day! 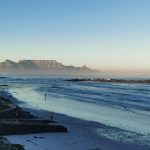 What You Need To Know About Swimming At Big BayTraining 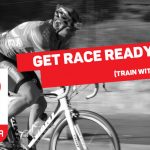